Her desire to be a medical doctor as a young girl may not have been realised but serendipity set her on a parallel path that has brought her everything and more. In conjunction with International Women’s Day, we celebrate the story of Datin Paduka Setia Dato’ Dr Aini Ideris, Pro-Chancellor of International Medical University (IMU) and her journey in science. Before taking the position of Pro-Chancellor at the IMU in early 2021, Datin Paduka Setia Dato’ Dr Aini Ideris was the first woman to be appointed as the Vice Chancellor of Universiti Putra Malaysia (UPM) – she was the 8th Vice Chancellor – a position she held from 2016 to 2020. Since graduating with a Doctor of Veterinary Medicine (DVM) degree in 1979 from UPM (at that time known as Universiti Pertanian Malaysia), she has collected under her belt, numerous accolades and achievements – from international and national awards for research and innovation, vaccine research breakthroughs, over 260 publications in journals and over 400 publications in proceedings and book chapters. She is a well known name internationally among the avian (her chosen field of specialisation) veterinarians. There is no doubt that she has a gift for science but it was something entirely different – her writing skills – that opened the doors for her, many years ago when she was still in school. Dato’ Aini recalls: “When we were in Form Three, the school that I went to, Sekolah Tun Fatimah in Johor Bahru, selected the students to be placed into Arts or Science streams based on one written examination. I always wanted to be in the Science stream. Unfortunately I had misunderstood the biology question and because of that I didn’t do well in the paper and I was placed in the Arts stream. I cried and cried. I was so disappointed as I wanted to be a doctor and not getting into the science stream had shattered all my dreams.” However, she accepted her fate and carried on in her Arts classes, “I was also good in my arts subjects,” she says. But when her English teacher assigned the class to write an essay about anything that they wanted to, Dato’ Aini took that opportunity and poured her heart out in the essay. “I wrote about my interests in science subjects and disappointment in not getting into the Science stream and how that has shattered my childhood dreams of becoming a doctor….” She mentioned that it was all because of just one mistake she made in misunderstanding the biology exam question. Her essay must have been filled with the passion of a 15-year-old girl as it grabbed the attention and interest of her English teacher who shared it with her class teacher and the other teachers. It led to the class teacher arranging for a reassessment of Dato Aini’s passion in science and her science knowledge through another exam. This was the second chance that she needed, Dr Aini recalls: “I made sure that I read all the questions carefully, and answered them very well,” she says laughing. This time the teachers were convinced that she was good to be in the Science stream. All creatures great and small She did not however carry on to become a ‘doctor of people’ as she had envisioned herself, but rather became a doctor of all creatures great and small. “When I applied for scholarships after my STPM, I was offered the Colombo Plan scholarship to study Nursing in Australia and later received an offer from University Malaya to study Dentistry,” she explains. Although these programmes were related to the medical field, she was not enamoured by them (she did confess that she was briefly tempted by the scholarship to study overseas). She declined the offers however and with great effort and determination searched for opportunities in other fields (“Remember, there was no internet then, in the early ‘70s!” she says). “I found out that there was another programme that was closely related to medical science… and that was veterinary science. I read up on it and got very interested because you get to learn close to everything that you would in a medical programme, from anatomy, physiology, pathology, medicine, surgery, post mortems, various treatments and so on. They were very similar disciplines when I looked at it in that way. On top of that, veterinary science would be interesting because you’re not dealing with just one species but with many different species, big and small. From a hummingbird weighing a few 100gms to elephants weighing several thousand kilos!” That was the first thing that attracted her to the course. The second thing that sealed the deal for her was her love for animals. “I love animals. With this programme, I could learn everything about the medical field and also help animals,” she says. “I have never regretted pursuing the veterinary programme. It has been a very interesting journey all the way.”

Future of science “I’m happy where I am now. I have taken the right path in terms of progression of my work, research, profession,” she says, adding that her own second chance all those years ago has made her more mindful of giving her students support as well. “If they don’t do well in exams, I talk to them, find out what their problems are and how we can assist them, because I know some students have different issues, different problems, so we cannot just dismiss them like that. We give them the opportunity to tell us what they are facing and try to help them.” Having played such an instrumental role in the development of the science field in Malaysia, what does she think about the younger generation and their interest in science? Are the young just as passionate about science as she was as a 15 year old? “I can see that there is a decline in the interest in science among students. Every year we see less applications than there are places in science-related programmes in the universities,” she laments. This is why Dato’ Aini has been involved in programmes that create awareness and exposure to the Science, Technology, Engineering and Mathematics (STEM) fields in schools. “And not just urban schools where they already have access to a lot of information. We must also go into schools where students have less exposure because they have no access to things such as the internet,” she says. She believes that science holds no gender bias and that both boys and girls should be encouraged to explore the many different facets of science and research. “There is no reason why a woman can’t go up to the moon. I can’t think of anything that a man can do that a woman cannot do in science and vice versa. Gender is not the issue. It depends on the individual. You are your own passion and competition. You can do anything but it’s up to you to choose what you want to.”

And her parting words to all who aspire to be scientists: “You will do well if you are passionate about your work and believe in it.” 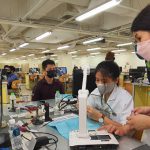 Gaining Knowledge in the Art and Science of Ocular Prosthetics 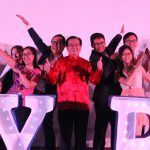 Humanities in Medical Education: Shaping the Humanistic Quality of the Future Health Providers 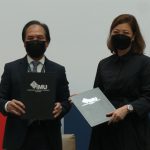