“Exp-10-re a Better Lifestyle” with a Healthy Lunchbox

In conjunction with the 10th anniversary of Nutrition and Dietetics Department, a lunchbox project with the theme of “Exp-10-re a Better Lifestyle” was conducted by Semester 4 students of the International Medical University’s Nutrition and Dietetics with Nutrition programmes. It is a project under the module: Food Service and Management 1, coordinated by Dr Yang Wai Yew. The project was an achievement that resembles the hard work of the students and supervisors. 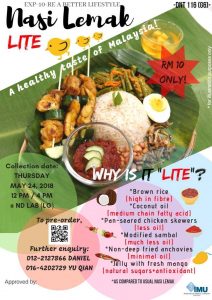 To execute the project, students were divided into groups of 9 to 11 and were assigned to determine their own food service establishment, developing the recipe according to the target population, pre-testing of recipes, pre selling of food vouchers and preparing at least 50 pax of lunch boxes on the day itself. In conjunction with the “Exp-10-re a Better Lifestyle” theme, the students were given the freedom to express their creativity by including 10 elements in their respective lunchboxes. Some groups included 10 different colours when selecting the ingredients for the eye appealing effect while some used 10 different ingredients in order to include a variety while planning the meal. However, it was not an easy task for the students as they were lacking in experiences of planning a menu which should be healthy, appealing to the eye and affordable at the same time. Nevertheless, teamwork, good communication skills between team members and improvements made based on the feedback given from the chef and lecturers were the key elements to event’s success. 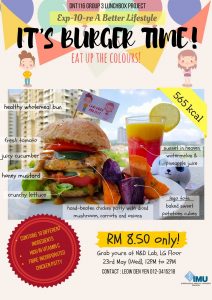 To promote the healthy lunchbox event, various channels had been used to spread awareness among the university students and lecturers. Promotional videos about the process of preparing lunch boxes were created in a creative and attractive manner. Other than that, information and posters about the lunchbox project were also created. To draw a potential customer’s attention to this annual event, students circulated the videos and posters by using different online platforms such as Facebook, Instagram and Snapchat. Emails had also been sent to create awareness among the IMU community about the project. In order to promote in a more holistic way, the students also approached potential customers personally and requested for the poster to be displayed on IMU’s computers’ desktop. In short, students had indirectly developed their designing skills while preparing the materials for these promotional activities. 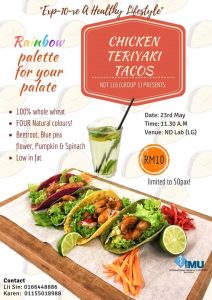 Apart from that, several entrepreneur skills were developed while working towards the sales target of 50 lunchboxes per group. It was not an easy task as students had to make sure that they earn some profit while making sure that the selling price does not burden potential customers. By comparing for best prices of raw materials available and selecting appropriate ingredients, the students were able to come out with lunch boxes that cost RM10 and below. Besides learning business skills, the students had learned to work in a creative and innovative way. A healthy version of nasi lemak and burgers, Korean cuisine that was blended with local flavours and healthy tacos which is a traditional Mexican dish were prepared and served. Another entrepreneur skill that were observed includes staying focused when preparing a huge amount of food within the time frame given. Students divided the work equally and stayed focused in order to produce high quality food that can satisfy their customers. 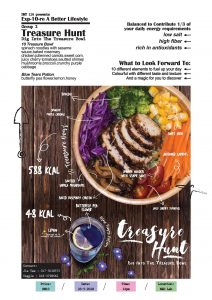 Specifically, the menu called “Rainbow Chicken Teriyaki Tacos” exceeded majority of the expectations especially from the Chef in terms of taste and presentation. Initially, the students wanted to produce a healthy rice bowl that can be easily whipped up in under an hour. However, coming from a Nutrition and Dietetics background, the main aim is to make a healthy lunchbox that the IMU community can enjoy eating with ease. Most of the people may think that eating healthily is boring and bland. The students quoted “We thought outside the box to prepare something that can create a “wow” factor to university students and at the same time, to create awareness among them to eat healthy food. We finally decided to sell Rainbow Chicken Teriyaki Taco, in which we made all the wraps by ourselves. We used all-natural ingredients to make the colorful wraps, such as spinach (green), pumpkin (yellow), blue pea flower (blue), and beetroot (red) to make the appearance of the meal look attractive. Besides, we emphasise on using less oil, sugar, and salt in making the chicken teriyaki. Hence, instead of using sugar, we used honey to marinate the chicken.” Surprisingly, other than that, the mint lemonade drink which goes together with the tacos was well received by everyone. To sum it all up, the project ran smoothly and ended successfully as all the students felt satisfied with their outcome and enjoyed the whole process. Watch this video on our students at this project’s trial run. 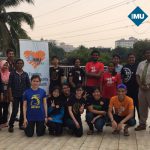 Learning to Interact with Autistic Children at Visits to NASOM 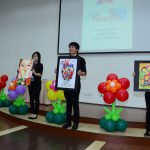 Celebrating Festival of the Arts 2014 at International Medical University 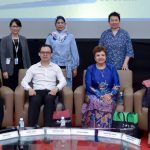 The Prize at the Top of the Medical Hill