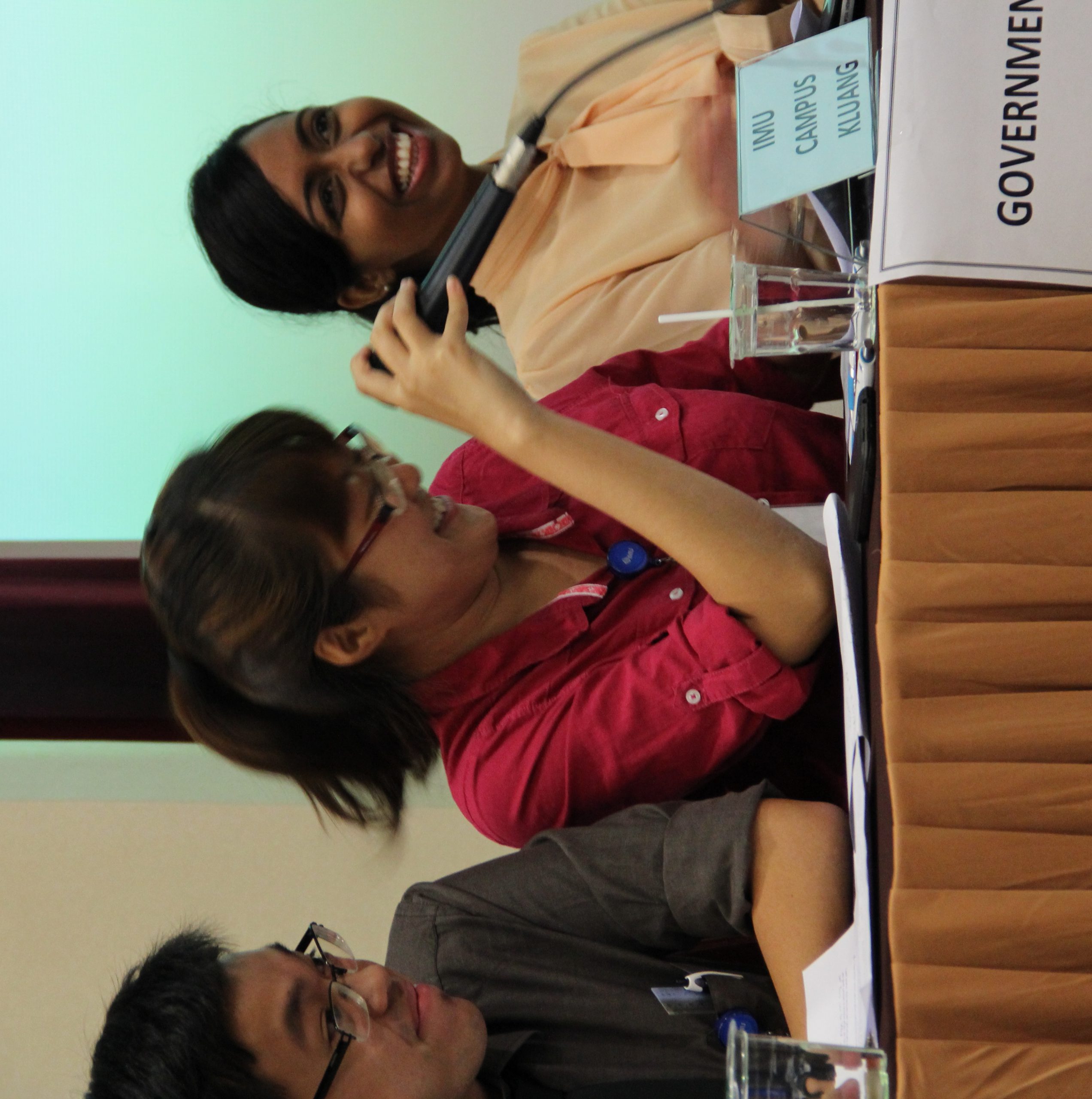 Kuala Lumpur, 21 May 2017 – Once again, the International Medical University (IMU) together with Majlis Hal-Ehwal Pelajar-Institut Pengajian Tinggi Swasta (HEP-IPTS) brought together some 75 debaters represented by some 25 teams from various private universities across the nation.  In support of the Ministry of Higher Education’s push for public universities to pursue financial autonomy, the winning team from HELP University engaged opponents from Asia Pacific University of Technology and Innovation (APU) during the gripping finals.  The HEP-IPTS Debate Tournament was hosted by IMU for the second consecutive year in collaboration with Majlis HEP-IPTS, with strong support by the Ministry of Higher Education(MOHE), whose Director General YBhg Datin Paduka Ir Dr Siti Hamisah Binti Tapsir was present at the finals.

“The Ministry of Higher Education is proud to note that our student debaters have been winning competitions,” said Dr Siti during her opening address.  “…both in the local and international arena,” she added in reference to the Malaysian team that won the Australasian Intervarsity Debating Championship in Perth last year.  “I am sure you would agree with me that we are definitely on the right track.”

Each year, over and above the team championship title, debaters covet the Best Speaker awards for the Grand Finals and Overall.  This year, Mithrun Swaminathan of HELP University took home the Grand Finals Best Speaker award adding a feather to his cap.  In recognition of their display of true form throughout the tournament, Amrit Agastia and Mahherrajan Narayanan of Taylor’s University were dubbed Overall Best Speaker.  They scored the same amount of total overall points and win the heart of the judges equally. 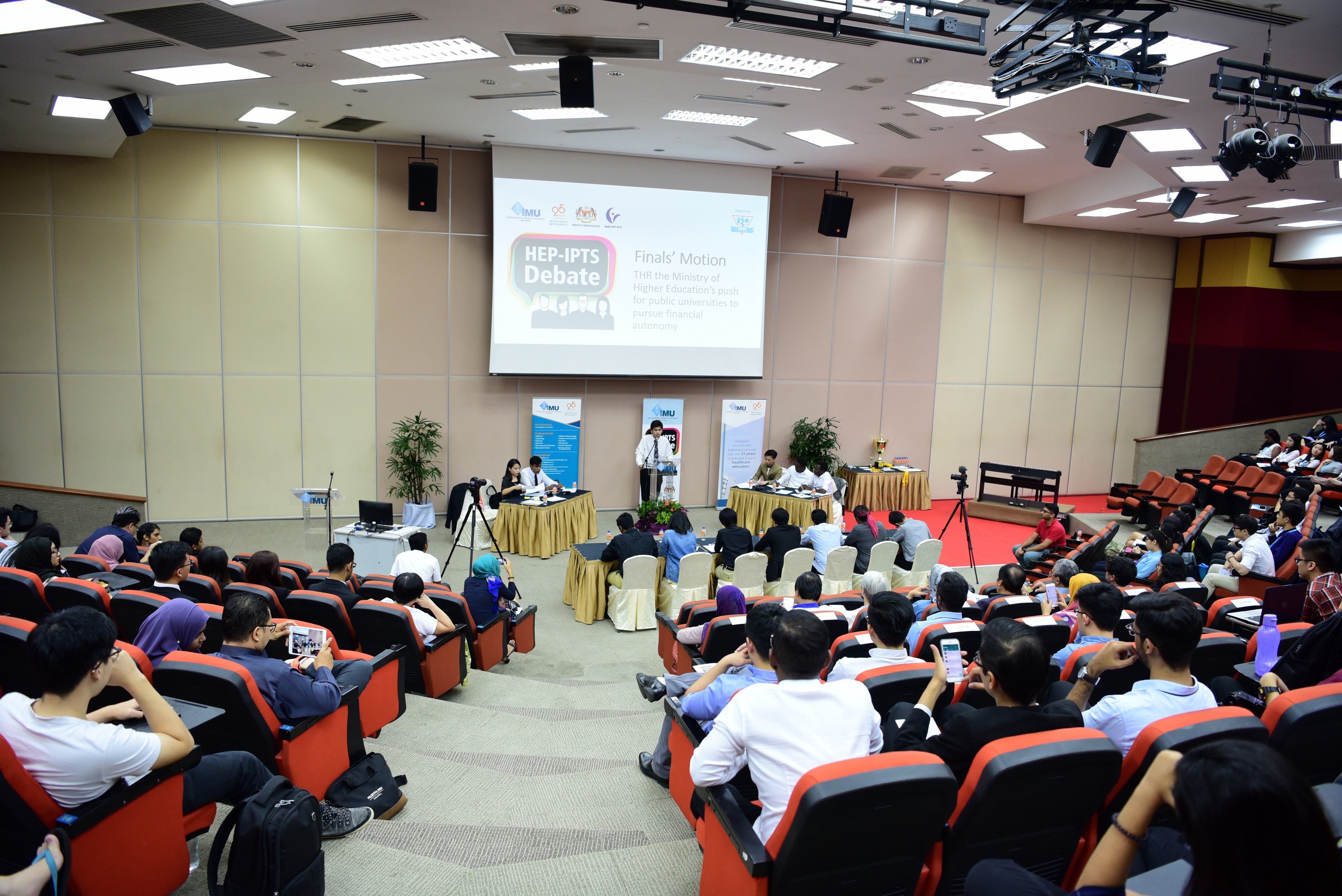 Prof Abdul Aziz Baba, Vice-Chancellor of IMU shared, “I am proud of the IMU Debating Society for once again organising this event for all private institutions of higher learning across the nation to come together not just to debate, but to network and further enhance their communication and public speaking skills.” “We know that each of the HEP-IPTS Debating Tournaments that are being organised each year are priming the future leaders of our nation!” he added while addressing all those who were present to witness the finals at the IMU Main Campus in Bukit Jalil.

“The initiative is to promote cross border bonding among all the graduates,” shared Tuan Haji Zamzuri Abdul Majid, Chairman of Majlis HEP IPTS.  He added, “Healthy competition among students will help build their characters, tenacity, and leadership skills… all (of which) are highly critical for a successful career in the future.” At university, students are encouraged to take part in extra-curricular activities to develop and hone their soft skills.  Activities outside of academics help to open students’ minds to creative thinking and thinking outside the box.  Teamwork, time management, organisation skills are all called to the forefront particularly through extra-curricular activities. To this end, debate has been viewed as an excellent platform to springboard students in public speaking, respecting the opinions of others and peaceably standing up for what they believe in. The IMU Debating Society was first set up in 2002 for this purpose. The leadership at IMU also found that the breadth of socioeconomic issues discussed during debates also helps to increase awareness of budding graduates who, it is hoped, will be able to go out and make a difference after their graduation. 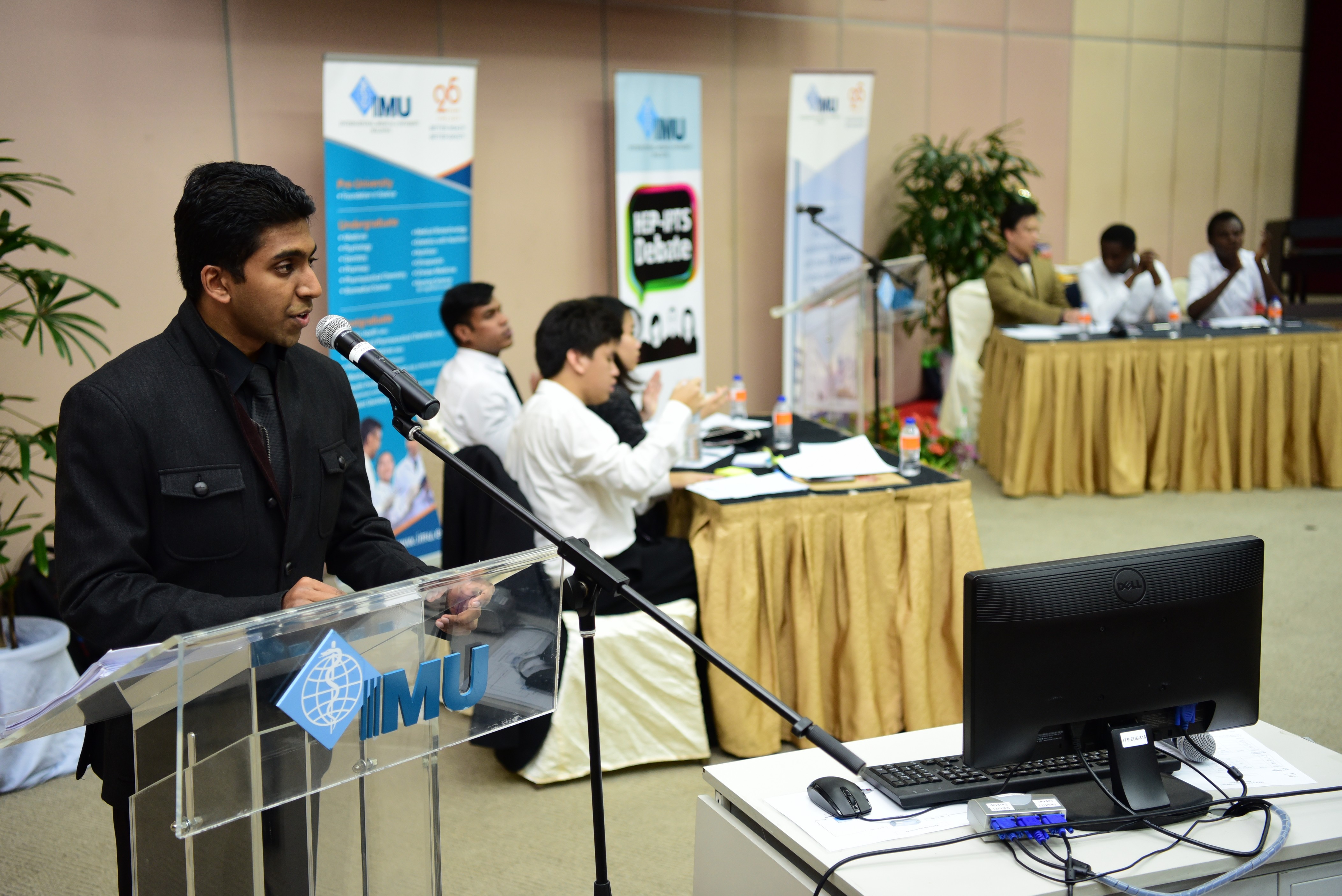 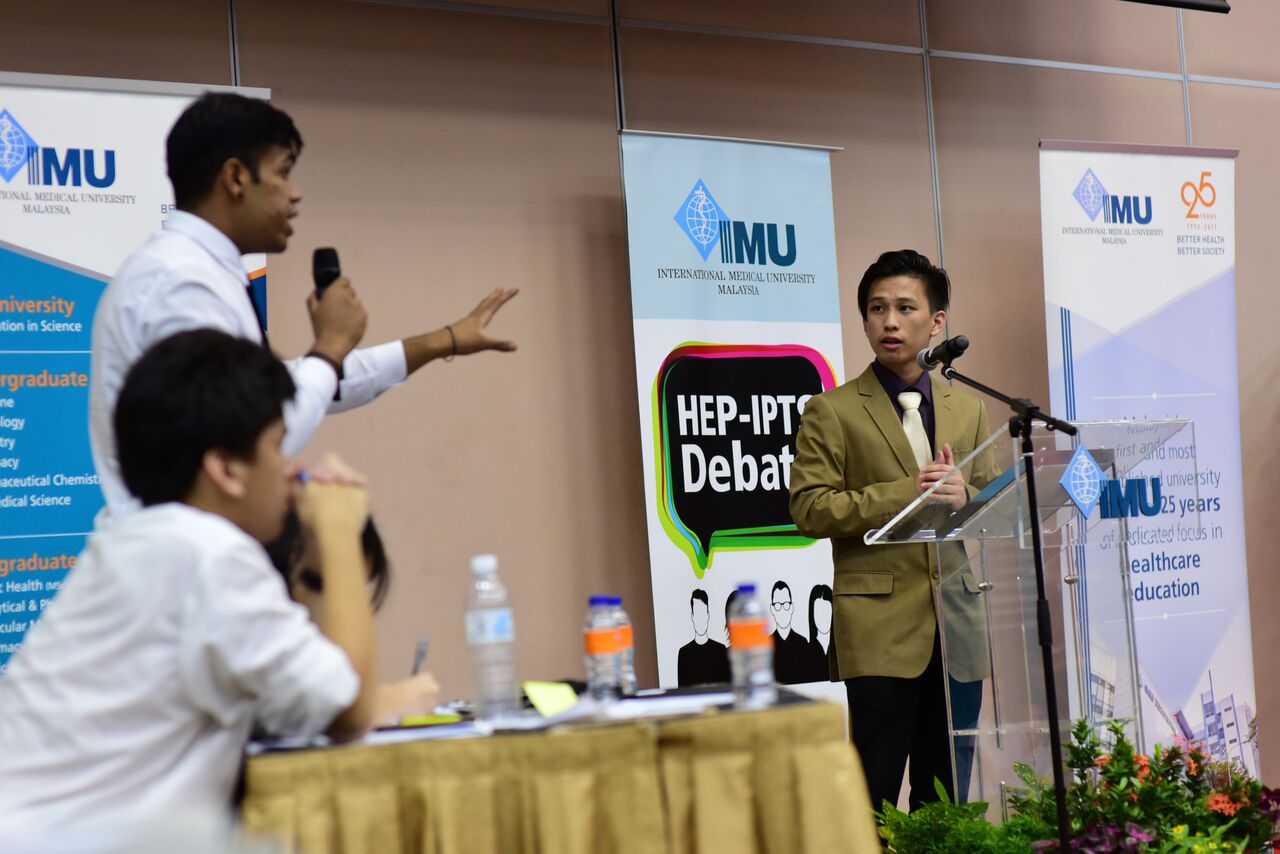 This year, the HEP-IPTS / IMU Debating Society saw a number of first time debaters receiving their inaugural exposure to a debating tournament.  The number has been increasing each year, which has been encouraging.  As part of the Higher Education Blueprint released by the MOHE in 2015, which is projected to span ten years, debates play a significant role in the fulfilment of the various shifts targeted by the ministry, including shifting from producing job seekers to job creators and balanced citizens with an entrepreneurial mindset. 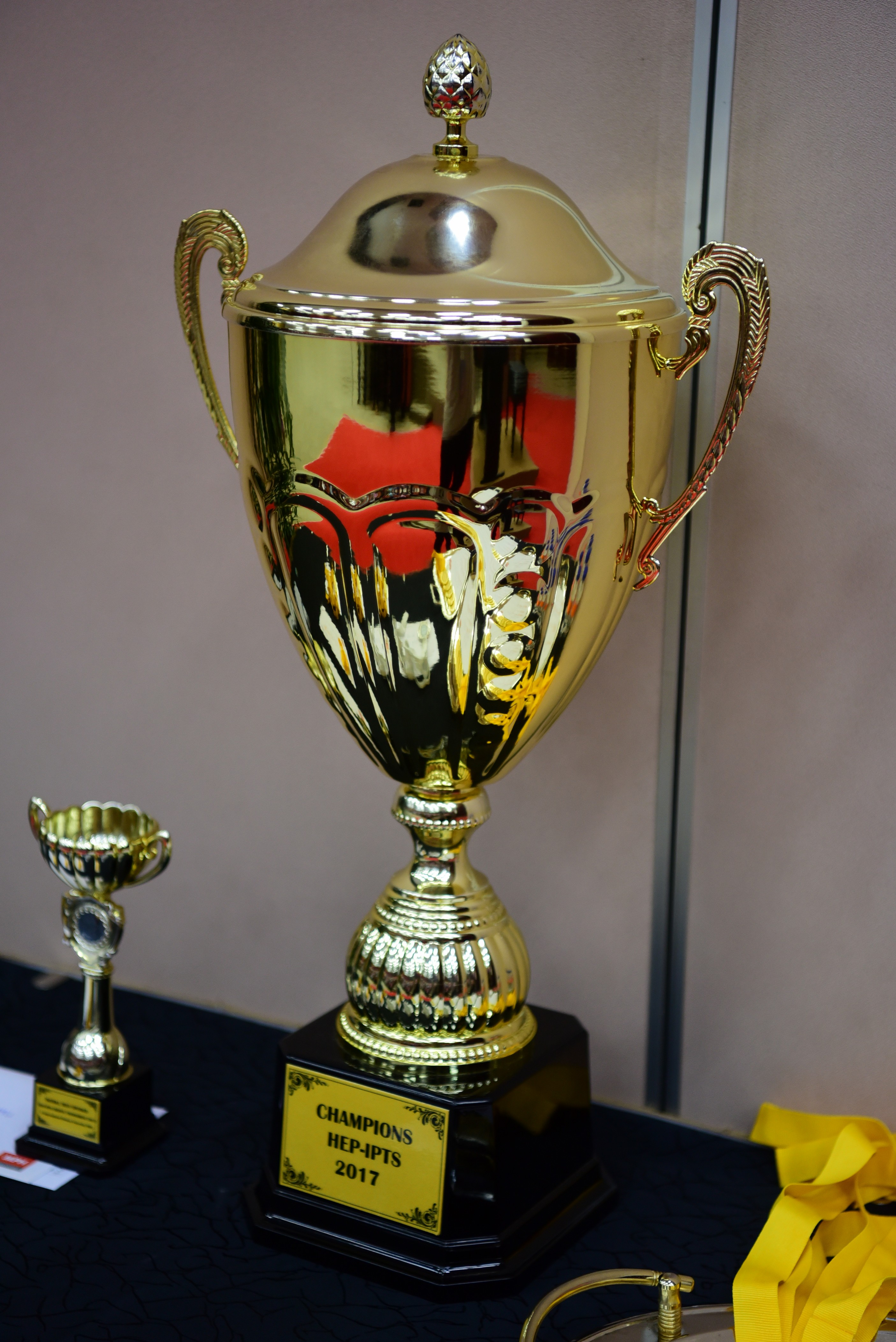 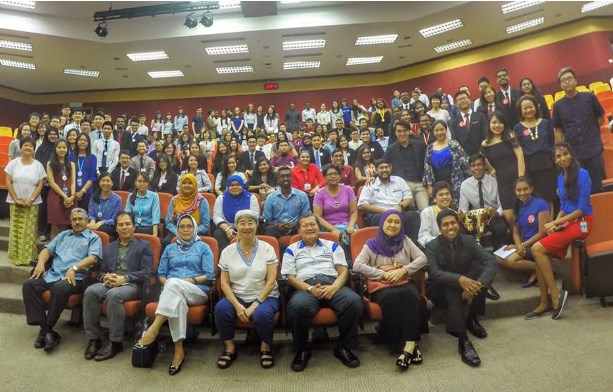 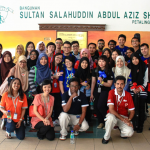 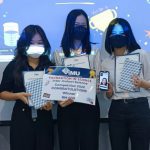 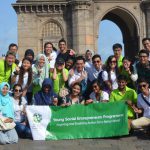 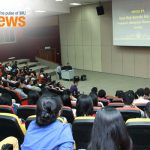 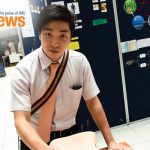 My Experience as a Chinese Medicine Student after MBBS