Kuala Lumpur, 29 April 2017 – Former IMU Chancellor, YBhg Dato’ Seri Dr T Devaraj was conferred with a Honorary Doctor of Medicine by the International Medical University (IMU) in recognition of his extensive  contributions towards the development and growth of medical practice. 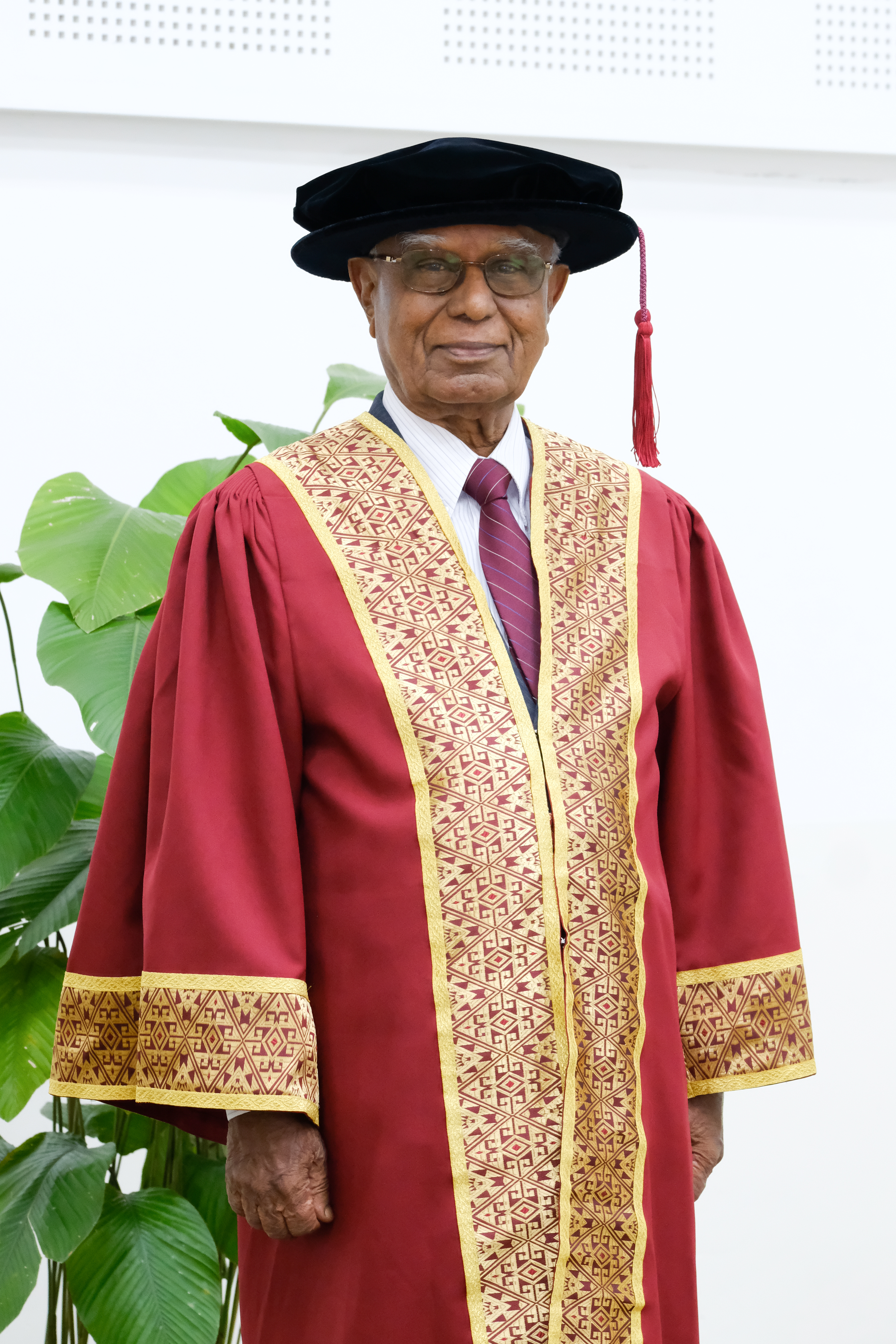 It follows his exceptional contributions and services to the medical profession and community throughout his career which are seen through his tireless efforts in promoting cancer awareness and the importance of palliative care. In 1992, he helped launch the hospice in Penang and has been appointed as Vice Chairman of the Penang Hospice Society since 2001. He is also the advisor to the Malaysian Hospice Council since 2014 and currently the Chairman of the National Cancer Society of Malaysia (NCSM), Penang Branch and board member of the NCSM National Council. In the area of medical profession, Devaraj was an elected member of the Malaysian Medical Council (MMC) from 1979-2000 and a founder member of the Malaysian Medical Association (MMA). He was later elected as President in 1983. He was also the Chairman for the Ethics Committee from 1985-2000 and member of the MMA Foundation in 1982-2000. 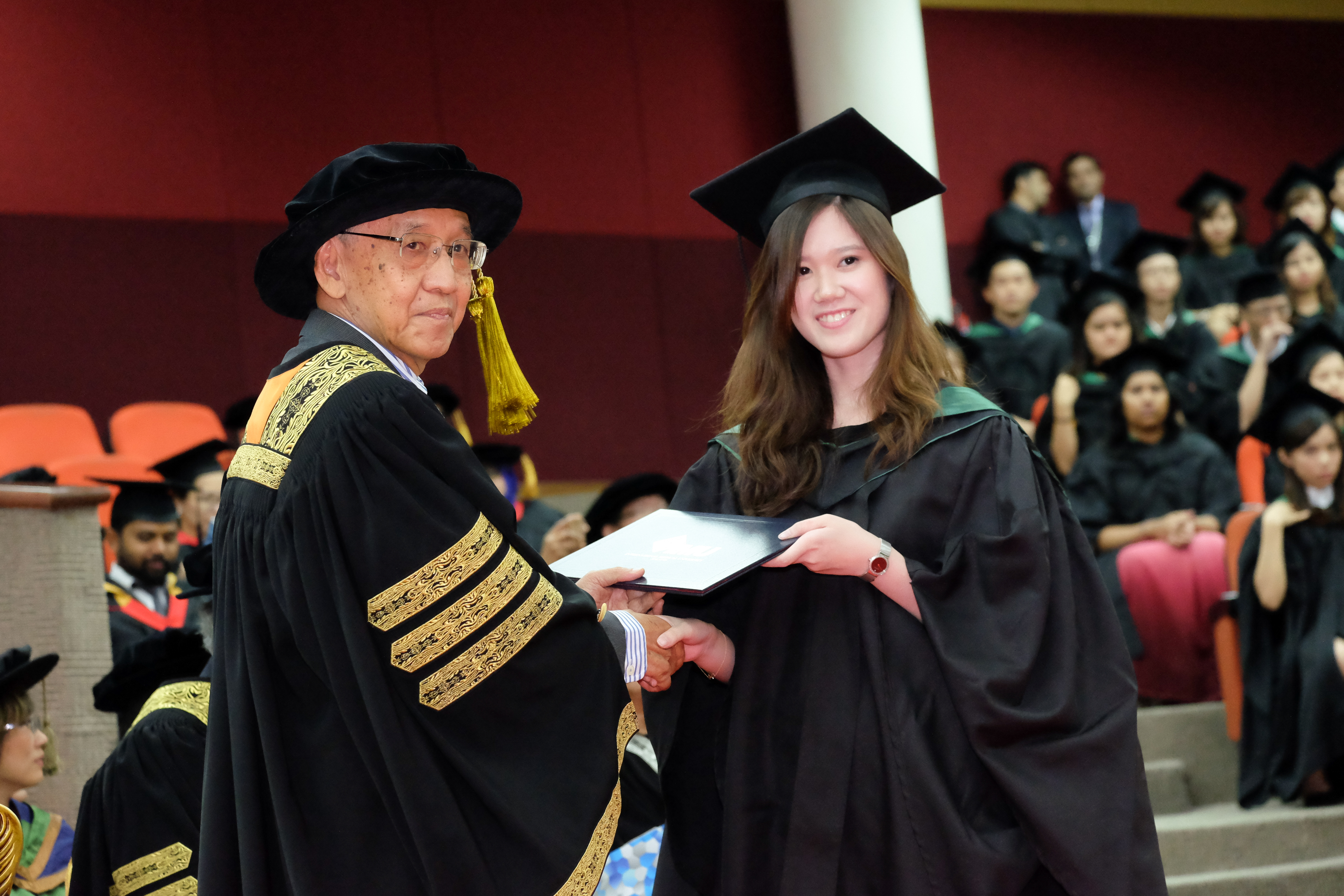 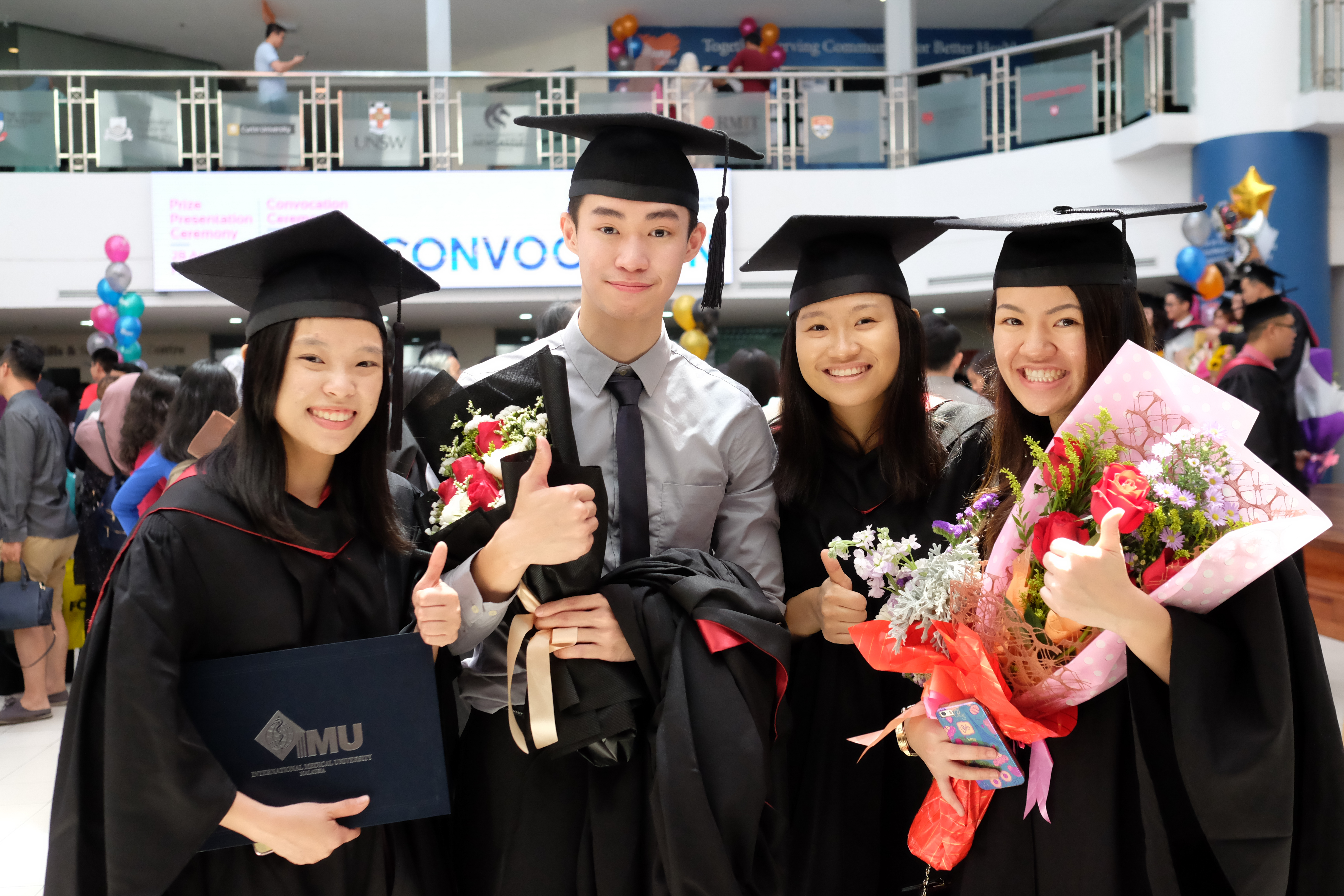 Bringing change among the medical professionals, Devaraj was a role model among many physicians. He played an influential role promoting work and professional ethics and encouraged the pursuit of excellence in medical profession. He has been bestowed numerous awards from the state government of Kedah, Penang and the Federal Government for his immense service to society and nation. He was also awarded the Caring Physicians of the World award in 2005 by the World Medical Association. 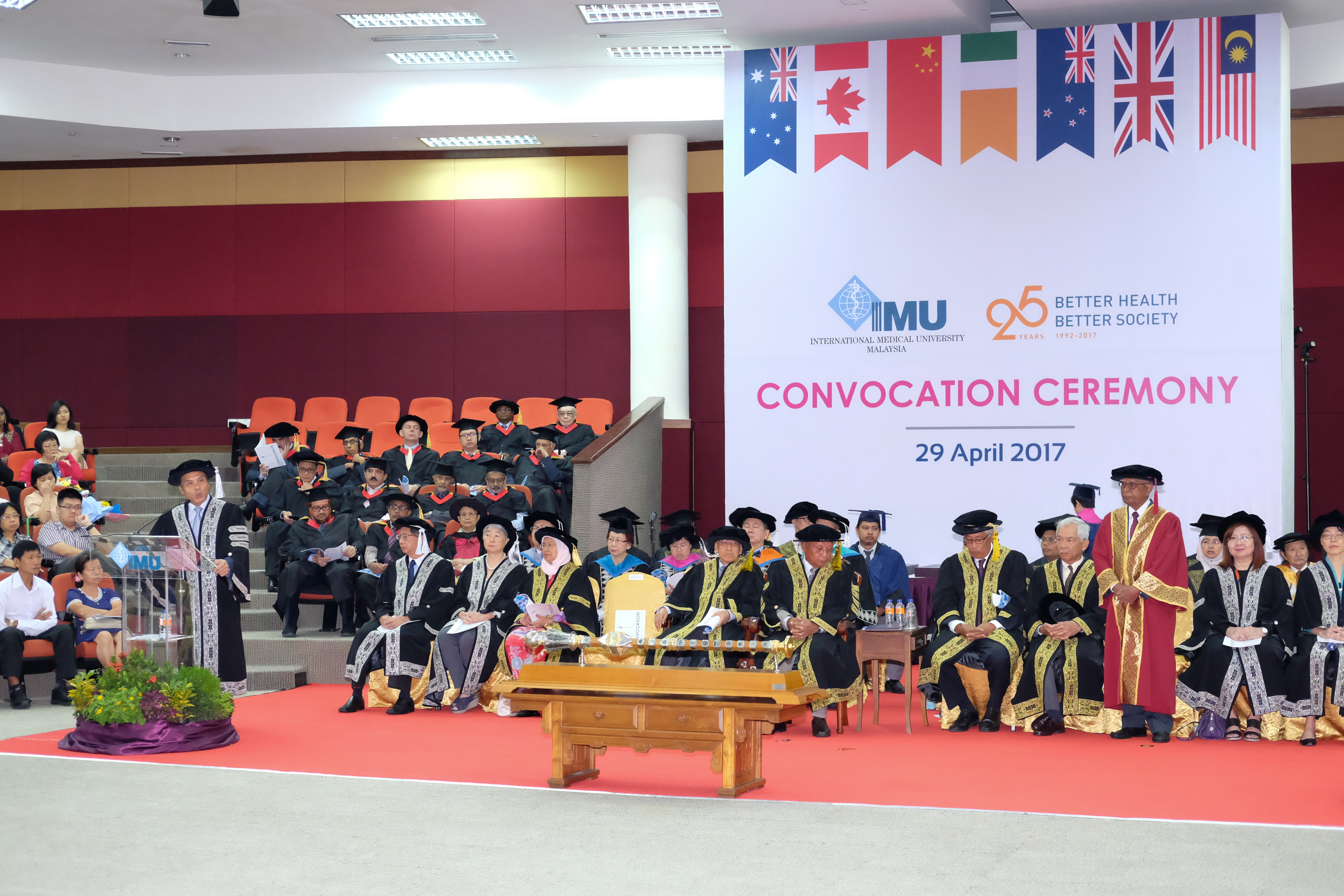 YBhg Dato’ Seri is among eight individuals who are honoured this year for their dedication that had greatly impacted the University’s success over the 25 years. These honorary degrees are conferred in conjunction with the University’s 25th anniversary. Read about the seven other individuals who received their honorary degrees at a Special Conferment Ceremony on 10 April 2017. 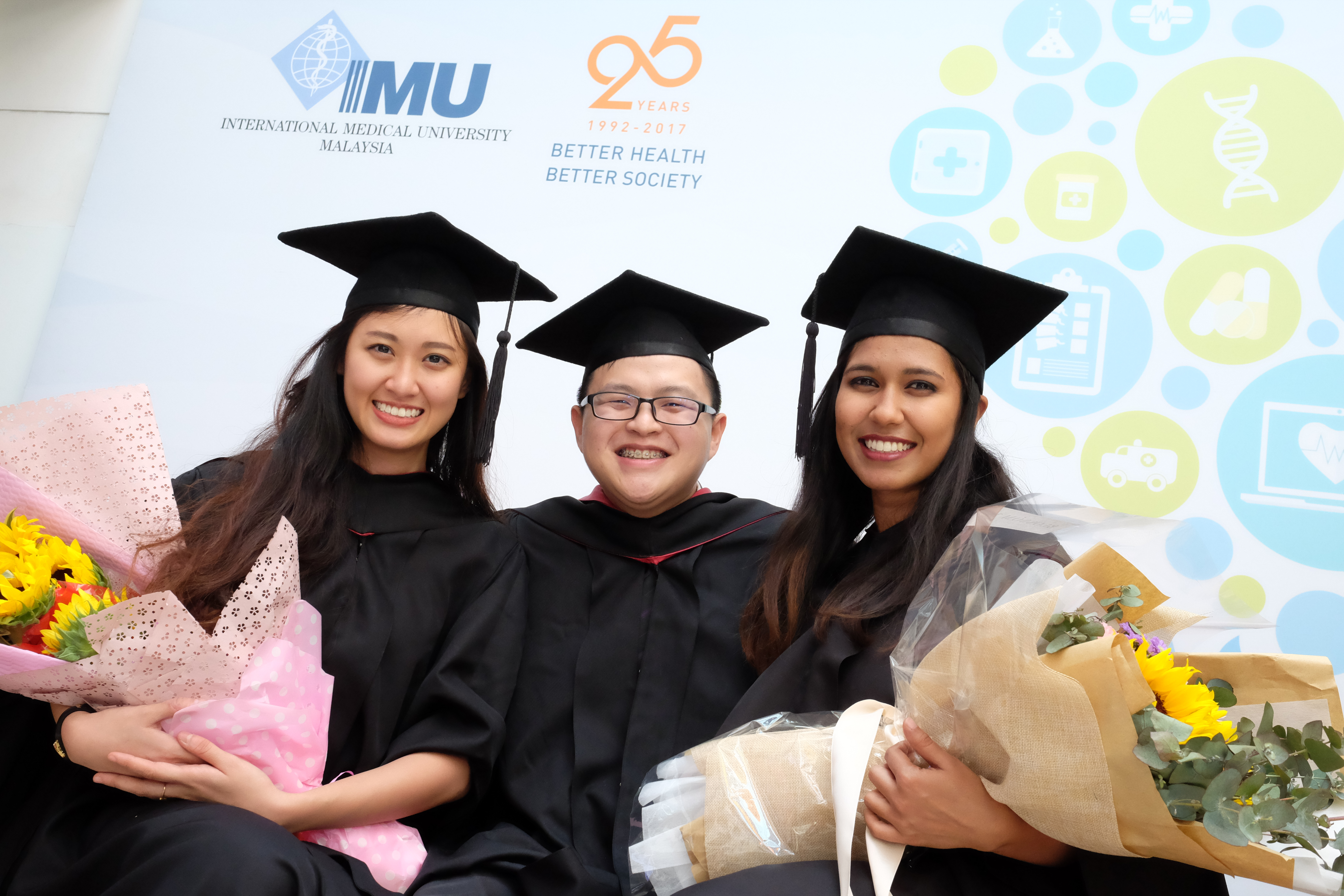 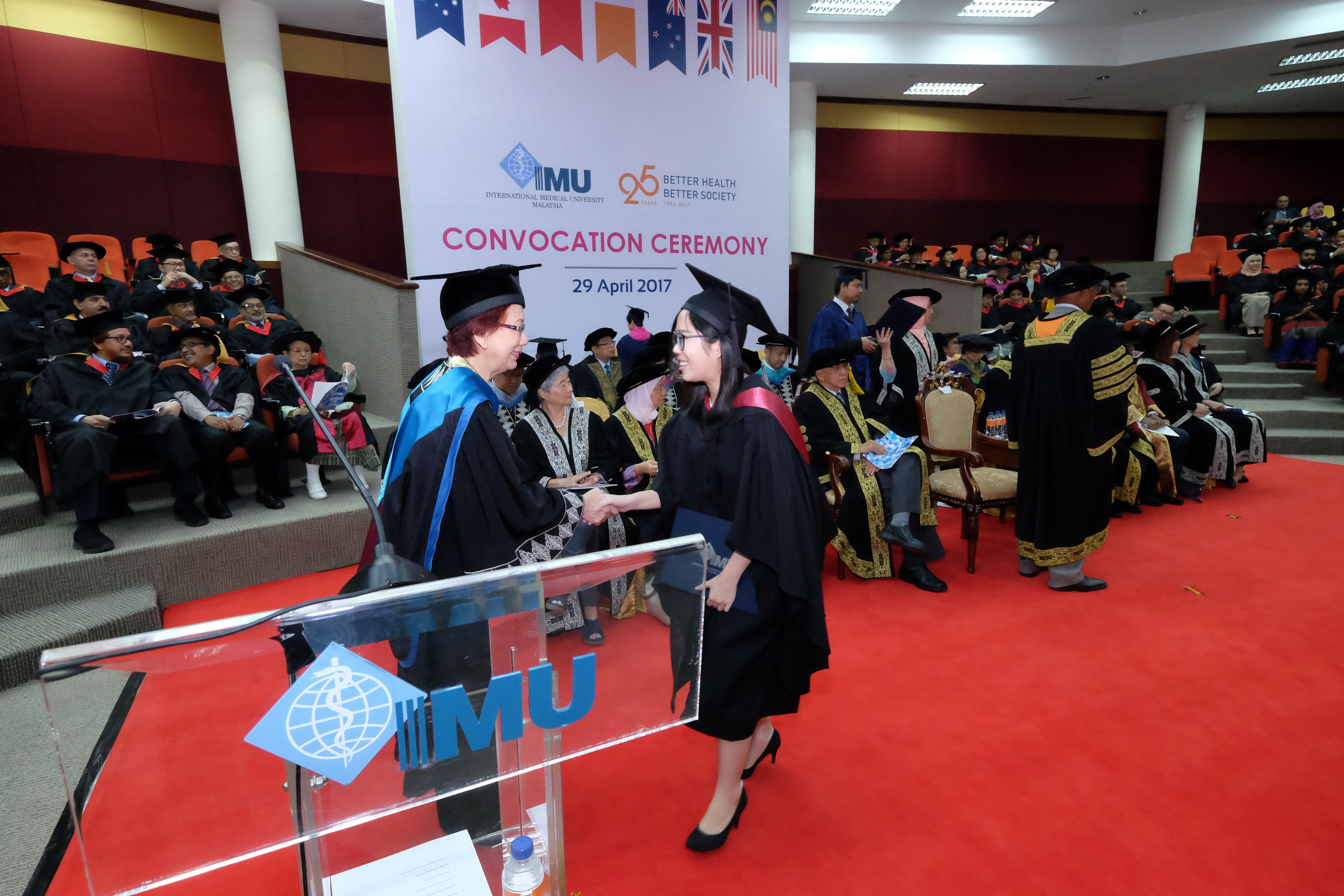 Receiving their postgraduate or undergraduate degrees at the same ceremony are more than 250 graduands who are the University’s latest graduates from one of our five Schools: Medicine, Dentistry, Pharmacy, Health Sciences and Postgraduate Studies. A celebratory atmosphere filled the auditorium at the half-day event which was held over two sessions to cater for the large number of graduates. Chancellor’s Speech Vice-Chancellor’s Speech Live broadcast of the ceremony as it unfolds inside the auditorium was made available at other lecture theatres in the University. This provided family members and friends who were unable to be in the auditorium the opportunity to witness this very special event. The conferment of the degrees held on 29 April 2017 is part of the graduation ceremonies that were conducted over two days. 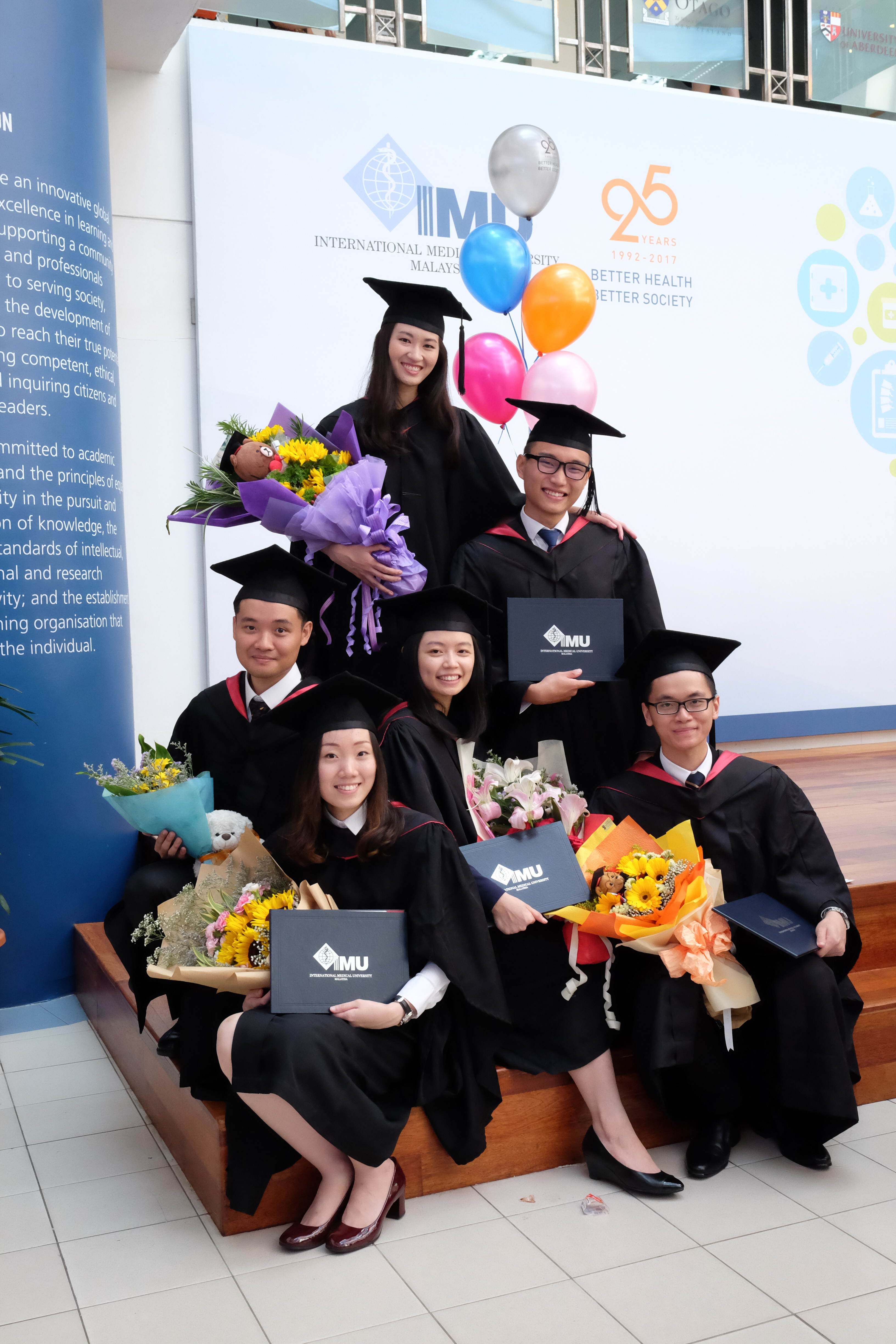 A Prize Presentation Ceremony was held on 28 April 2017 to celebrate the academic excellence of the University’s best students. These students received numerous awards for their outstanding achievements in their respective fields at this ceremony. Inspired by a famous motivational speaker who is an opthalmologist, Prof Muhaya, recipient of the Dr John Joseph Bosco Memorial Gold Medal and medical graduate, Nurliyana Mardhiah binti Mohd Fauzi said, “I never study for the sole purpose of scoring good marks in exam, but to be the best attending physician for my future patients. I believe that it took more than just reading a textbook to be an all-rounder. By participating in other activities such as student body and community work, I gained a different set of skills which I could not have by studying alone. Although it can be challenging at time, prioritisation is the key for me which could easily be done by having a to-do list according to deadline and the level of importance.”

Her advice to future medical students is “As cliché as it sounds, be in this field for the right reasons. When you have a good reason, you will always have something to bounce at whenever you struggle or face difficult times in this journey. There is no one right reason, but keep asking yourself whether the reason you want to pursue medical field is a right one for you.”

Another award winner at this convocation is Tay Pei Shen who graduated with a degree in chiropractic. She was overjoyed when she was informed that she is a top student. “I felt grateful to my family, lecturers and friends – that I am able to make them proud. All the perseverance had paid off.  This award also further motivates me to continue on my journey as a chiropractor and to be a better person. “ 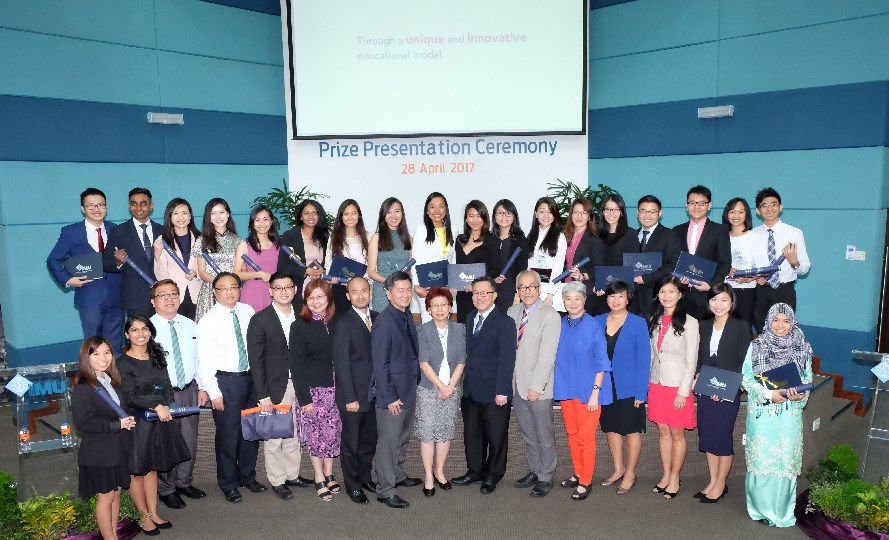 Pei Shen added, “The most memorable experience among the community outreach programmes was the 2016 International Clinical Externship Programme in Philippines. It was a collaborative effort between IMU and RMIT chiropractic students and the Philippine healthcare team. This trip allows us to reach out to those who are in need of healthcare advices and treatments. We were also able to share our experiences among each other and at the same time, learn about more conditions together. Overall, this trip has fortified my passion in the chiropractic profession.” 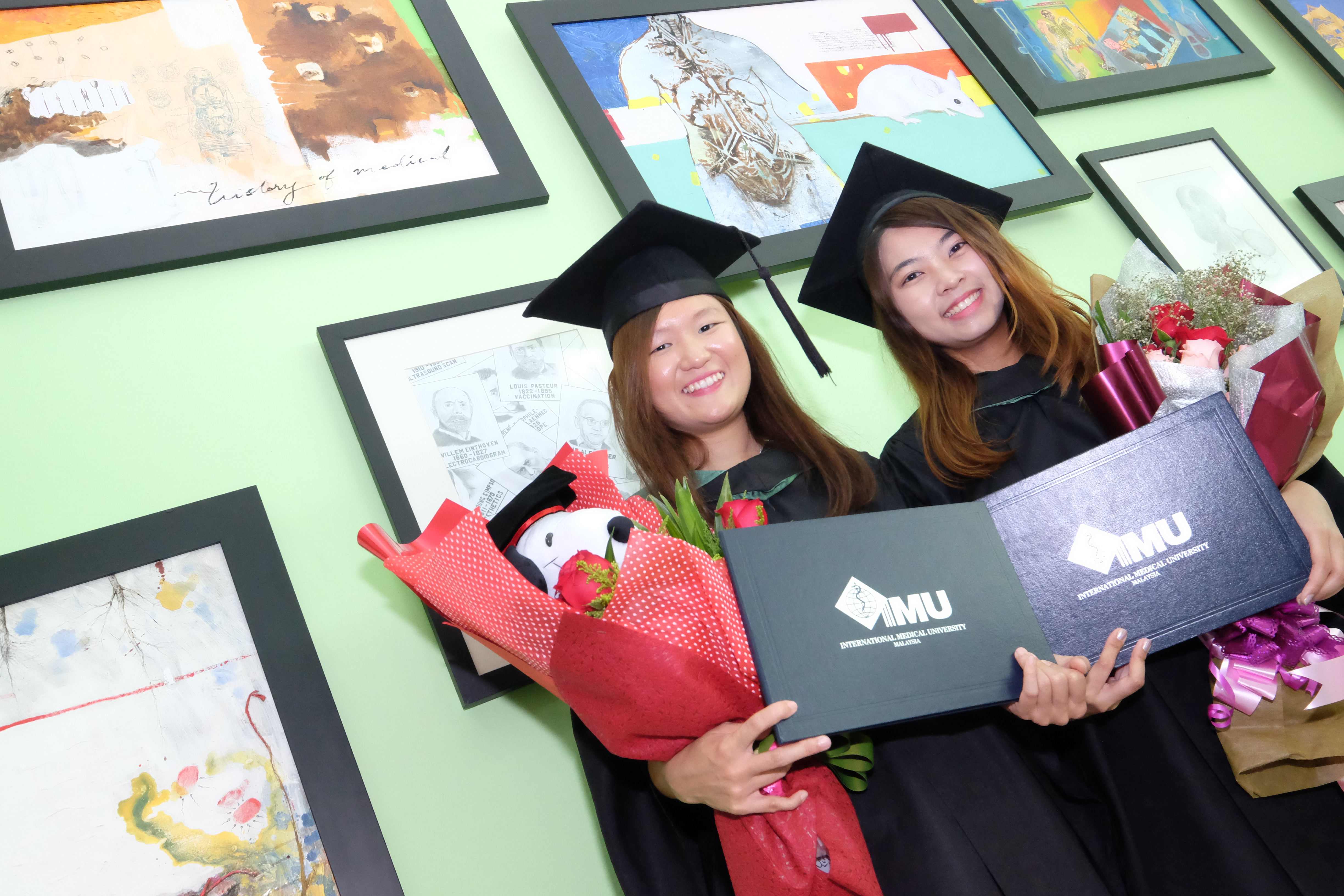 Another student who enjoyed the community programmes at IMU is Swarnaa Sanmuganathan, who is the top student for the psychology graduating class. “I think it’s wonderful that IMU provides plenty of community service opportunities to a point I can pick and choose the programme to go for depending on the type of experience I want to gain. I enjoyed my volunteering work as it exposes me to the different types of people and situations that I would not get to see on a typical day. Not only does that serve as a reality check and reminds me to be thankful to my parents but it makes me want to help the unfortunate more after seeing how even little things for us would mean so much more for them. Looking back at all the projects and events that I was involved in, it definitely built my soft skills and gave more meaning to my years in IMU.”

Her advice to those who want to learn psychology is to go for it. “People are all around us and that’s why the field is growing to benefit different populations and purposes. Whether your purpose is to understand yourself better and improve the lives of others or to discover unknown answers through research I guarantee the knowledge and skills that you gain will be an asset to you as its application knows no boundaries”. 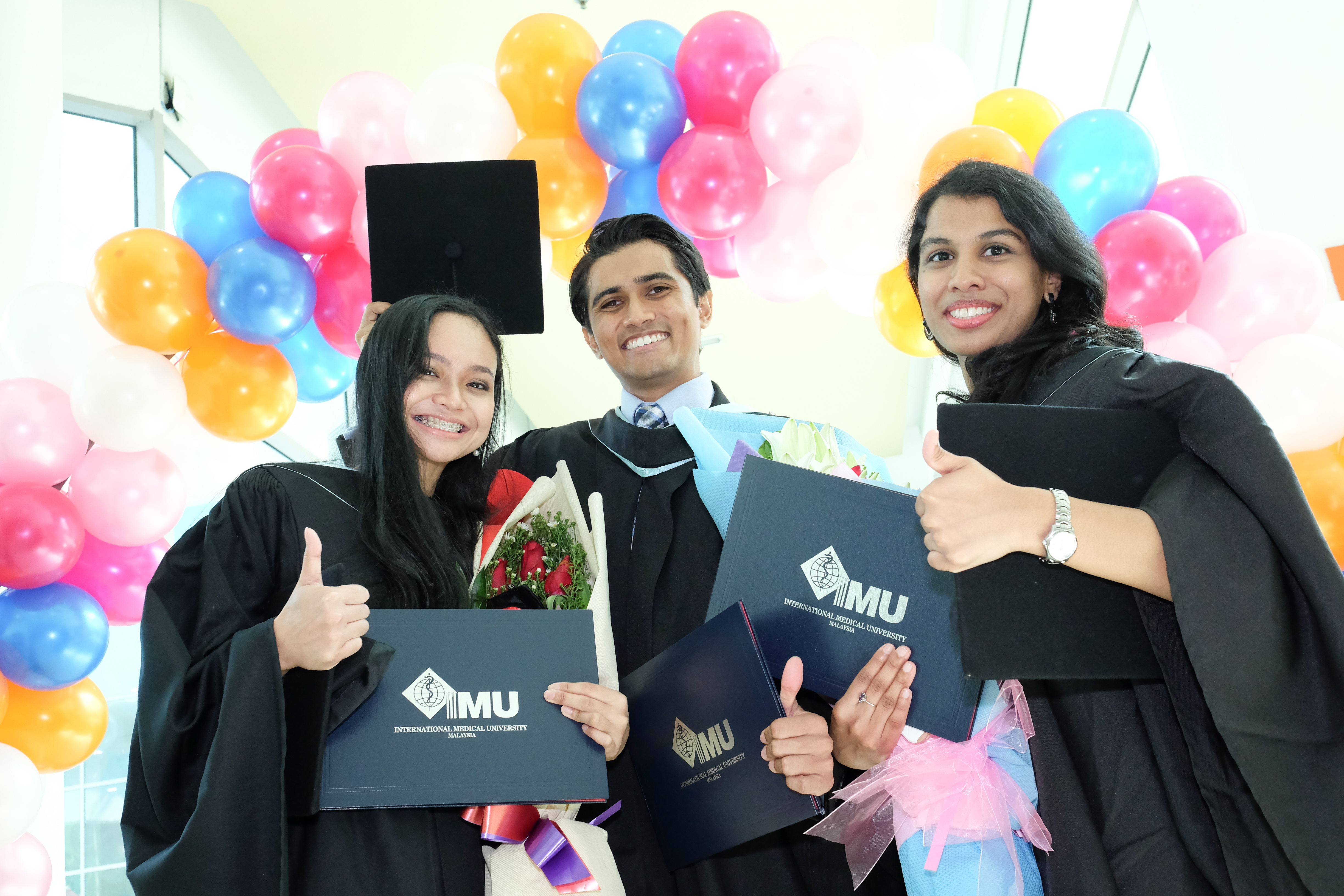 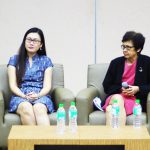 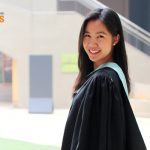 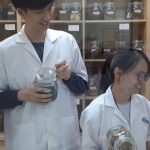 Journey Back to the Alma Mater: IMU Alumna Return as Lecturer