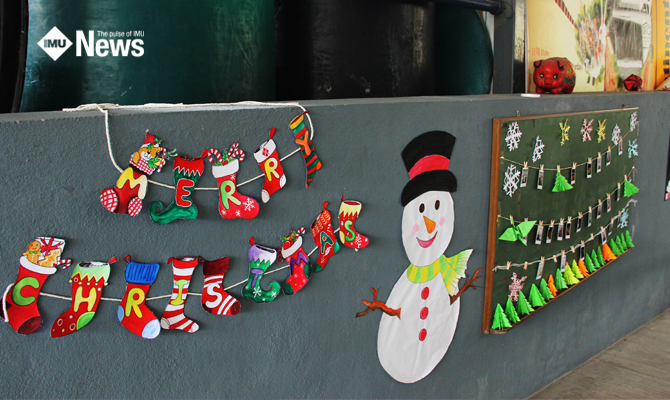 10 December 2016 – Love and happiness overflowed every single elderly’s heart at Rumah Charis Home for the Aged, Lucky Garden, Kuala Lumpur in an advance Christmas celebration called Be the Angels of the Elderly (BAE), held by a bunch of students from School of Pharmacy, IMU as a project under IMU Cares.

Christmas is an annual religious and cultural celebration among people around the world. The feeling of ‘home’ is often highlighted during festivities. This sparked an idea and a desire in the students to organise an event to reach out to the elderly and bring warmth to them in this joyous festival season. This is also what the name of the event ‘Be the Angel of the Elderly’(BAE) signified.

Since Rumah Charis is a Christian-based elderly home, the students chose to celebrate this Christian festival with them. This event aims at embracing positive feelings of respect and an understanding that older people are important members of society. The event was planned as an amazing learning opportunity for all the students and staff while benefiting members of the society. As scheduled, 25 students (as committee members, volunteers and performers), Dr Louis Liew Yun Khoon and Dr Wong Pei Se arrived at Rumah Charis at 9 am. The home manager, Suzzane, caregivers and the elderly welcomed the arrival of the kind angels from IMU with open arms. There was a total of 25 elderly at the home under the care of at least 3 caregivers in a day. According to the home manager, independent bodies and individual volunteers will help out at the home from time to time. The students took the initiative to talk to the elderly in their spoken language, Mandarin and Cantonese, in order to form closer bonds with the elderly. To prepare for the upcoming activities, respective group of students started cleaning up the place, decorating the home and setting up the public address system (PA system) in a well-ordered manner. Dr Louis and the two project leaders, Chong Kae Ru and Chia Chun Hou, guided and helped with all the work to ensure that everything was on track. Meanwhile, Dr Wong Pei Se counselled the care givers and elderly who has itchy skin on the use of aqueous cream. Teamwork sped up the work and the preparations were completed within half an hour. 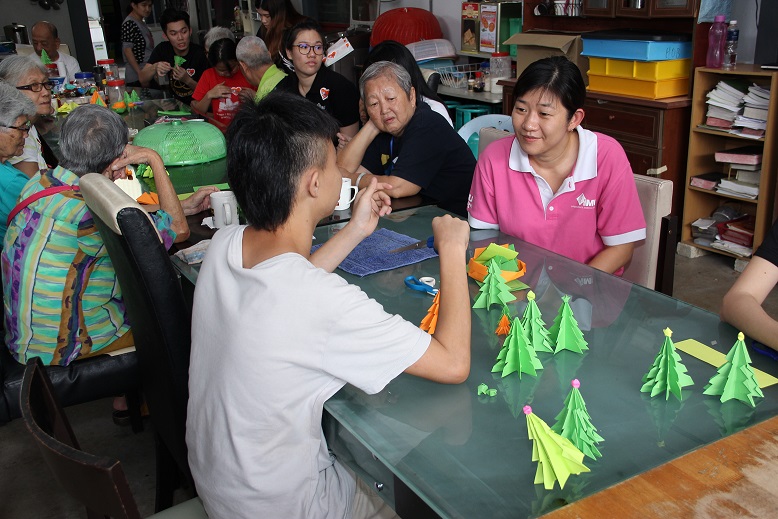 The interactive session with the elderly started right after that at 9:30 am. One-to-one teaching by the students on how to make a Christmas tree origami was conducted. The students showed each step slowly and assist the elderly with patience. From there the elderly opened up and started to show more interest. Some elderly even showed the students how to make other origami as well and wanted them to keep those as a present! While some continue making paper arts and talking to the elderly, the decoration team started to set up the Christmas photo booth. It was made up of a white cloth with a LED light string fixed on it, decorated with the words “MERRY CHRISTMAS” pre-drawn by decoration team leader, Sim Yan Jing, and her team. The lack of firm support to hang up the cloth and the fixing of LED light strings on the white cloth gave  a hard time for the team but still, with excellent cooperation, the team managed to set it up in time. At the same time, some of the decoration team members started decorating the blackboard. It was cleaned and decorated with paper snowflakes and snowman prepared by Sim Yan Jing. Cotton twine and art clips was fixed to the blackboard to hang up polaroid photos that was taken afterwards. The home was accessorised with red-and-white Christmas paper chain prepared by the students to match the theme of the upcoming holiday. With a high team spirit, the decorating was completed within an hour.

At 10:30 am, the long-awaited performances were presented along with excited cheering. There were altogether 3 groups of performances. Chen Wei Mun (BP114) and Ling Ming (BP114) kick started the session with two classic Chinese songs – “Tian Mi Mi (甜蜜蜜)” and “Zhang Sheng Xiang Qi (掌声响起)”. The nostalgic melody seemed to recall old sweet memories of the elderly, prompting them to croon with smiling faces. The performers even walked around as they sang and some of the elderly joined them eventually! 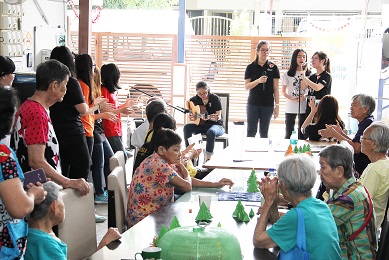 The next performance was presented by Lesley Pua Jia Wei (BP215). This talented young boy sat with his semi- acoustic guitar, coordinating his hands and vocals to produce a Cantonese song “Hai Kuo Tian Kong (海阔天空)” and a Hokkien song “Hua Hee Tio Ho (欢喜就好)”. It was received very well  from the elderly as these are of the major languages that they speak. Upon requests from the elderly, he spontaneously played a classic Christmas song “We Wish You A Merry Christmas” to send his blessings in this festive season. The last group of performers comprised of 4 girls from FIS116 — Michelle Ang, Kimberly Lim, Joelynn Lim,and Ooi Wen Qi. Their performance included an English song “White Christmas” and a Chinese song “Lao Shu Ai Da Mi (老鼠爱大米)” The guitarist, Michelle Ang, was sick from food poisoning since the day before but she insisted on completing the performance as she did not want to disappoint the elderly. The performances came to an end at 11:30 am with satisfied broad smiles on the elderly’s faces and a loud applause.

Next was the polaroid pictures taking session. The elderly were invited to the photo booth to take polaroid pictures with the Christmas photo props prepared by Yan Jing. The colourful decorations and photo props made the individuals in the photos look exceptionally delightful and overjoyed. Knowing that some of the elderly are rather passive, the students persuaded them to join in these activities with sheer determination and patience. The elderly was moved by the sincerity of the students and willingly joined the photo taking session with groups of volunteers eventually. They were amazed by the hard work of the students and some even asked to take more photos as they really like the set up. The polaroid photos were clipped onto a cotton twine fixed on the blackboard as part of the decoration as well as a tangible memories for the elderly to reminisce this jolly time between elderly and the IMU students.

Lunch was served around 12 pm. The elderly were served first before fellow volunteers as they were the main guests of the day. The elderly and volunteers joined each other to have lunch together. It simply showed how close the bond was. Some volunteers even helped out with tasks requested by the elderly. Some helped to get rid of the dead branches of a tree which would be dangerous if left untended while others helped to clean the room of the elderly. 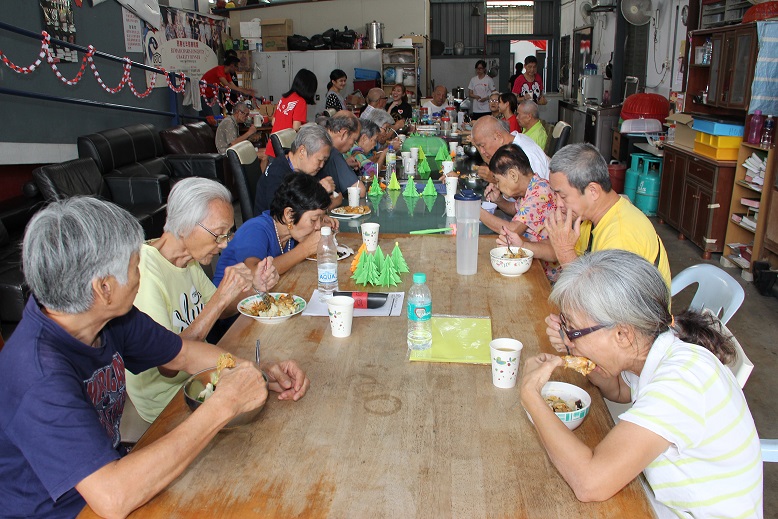 As it drew close to the end of the event, one of the caregiver, on behalf of the home manager, present a flag from Rumah Charis as a token of appreciation to the project leaders. After cleaning up, the students waved goodbye to the elderly and left with hearts of gratitude. The feedback from the volunteers and lecturer reflected a general good response on the event. This event has beyond a shadow of doubt brought to this elderly a lively day notwithstanding everlasting happiness in their heart. 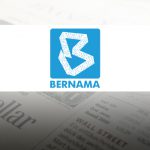 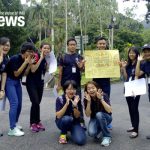 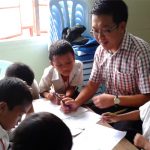 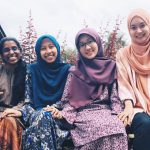