Kelantan Girl Achieves Her Dream to be a Chiropractor via IMU

If someone truly believes in their ability, they are able to significantly alter their circumstances to fully conquer it.

Firstly, before proceeding to the entire story, have you heard of Chiropractic? Chiropractic is the relationship between the body’s structure (primarily of the spine) and its function (as coordinated by the nervous system). Spinal manipulation therapy / adjustment is one of the chiropractic treatments. This method typically contacts patients directly through hands-on based approach. As we know, there is lack of awareness of chiropractic treatment especially among the Malay population, specifically in Kelantan. 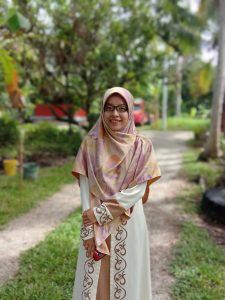 Almost 95% of netizen in Kelantan are Muslims where Islam is the main religion for that state in Malaysia. One of the few understanding we all should know that it is prohibited for a non-mahram Muslim woman (one to whom the opposite gender is not related to) to shake hands or be in contact with the opposite gender and vice versa. Due to this, there are many limitations that a female Muslim has to face in the medical field. One of the limitations is the awareness of chiropractic option is very low and no one is taking the effort to pursue this field in Kelantan. As a chiropractor, you would need to have physical contact via hands to the patient’s body to correct their misalignment of bones. It is not possible any other way. In order for something beautiful to happen, someone out there has to make the first move to take the first step. A young girl from a small town in Kelantan decided that she will be one of them who will conquer it all. Noorhazwani mustered the courage to pursue her passion not only to change her life but the lives of others around her – especially kids. How she got this courage, she has always been passionate about healing children but never liked the sight of blood. Hence, she found another option which would fulfil her burning desire. She took the courage to break the barriers and stigma being a female Muslim indulging and pursuing in the chiropractic industry which is currently monopolised by the non-Bumiputera community. According to Hazwani, when a female doctor is more qualified and skilled in the required field that the patient requires an examination in then the above is allowed. Hazwani also mentioned the “niat baik” has to be there, the intention and spirit to do good to others. Hazwani has a full amount of good intention for this. 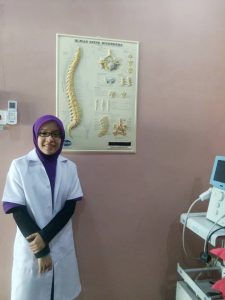 With uncertainty on what lies before her upon completing her course and once she heads back to her home ground, Kelantan. Hazwani pursues her passion in IMU, the only university which she felt who would understand her circumstances. She was fully sponsored and supported by Yayasan Peneraju Pendidikan Bumiputera throughout 4 years of her chiropractic course in IMU. You must be wondering about her family, does she get the support she needs to strive through this challenge. Hazwani’s family are unsure what chiropractor practitioner does exactly but they support her full heartedly believing their daughter will never make wrong choices. She would also be the first graduate in her family, which is a proud moment for all. All they know is Hazwani is pursuing this to give back to the community. Hazwani feels that she has a heavy responsibility to bring awareness of the benefits of visiting a chiropractor in Kelantan. She believes it is a less invasive method before reaching out to drugs and surgery. More often it’s not about starting on the things you are passionate about but rather continuing it when it gets tough in many ways. Hazwani failed a paper as she was just about to graduate but that didn’t dishearten her, in fact, it opened the door to an opportunity to many who are not gifted enough to receive it. Mrs Phoong from SDU (Self Development Unit), a beautiful soul who guided her and ensured Hazwani remained positive throughout her one-year journey. The journey most students are afraid of, consequences of failing a paper which leads you to a wait for a year in order to graduate. Hazwani was a CA (Chiropractor Assistant) for a year at IMU Healthcare, they were very supportive, helpful and patient. That one year with IMU Healthcare made a huge difference and shifted Hazwani’s life. She not only gained sufficient knowledge and further polished her skills but it also helped her financially. “I was very confident I am able to pass my paper that I didn’t manage to get through, just by working with IMU Healthcare” expressed Hazwani. With this, she managed to get an opening with ShalisCare Rehab & Physio Center Sdn Bhd in Kelantan. She just randomly gave a call and to her surprise, they were looking for a chiropractor – just her luck. She is ready to beat the uncertain and volatile situation once she heads back to Kelantan with a positive spirit and mind. She knows she may face new challenges but she took an additional effort in seeking out for advice from the President of ACM (Association Chiropractic Malaysia) Dr Wong Yi Kai on how to make her next step a good next step as a chiropractor. Hazwani wants to reach out to the villages in Kelantan and to be a successful chiropractor in her own clinic in the near future.

“Fall once and get up a million times. Voice out your weakness and you will shine brighter.” – Noorhazwani Mohd Zain 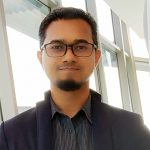 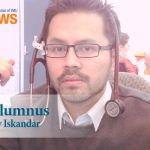 IMU Alumnus Enjoys the Best of Universities in Malaysia and Australia 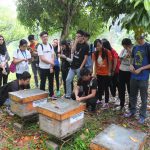